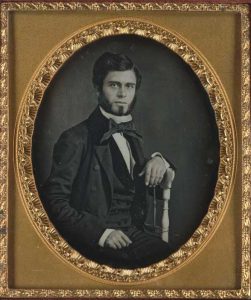 On this day in 1874, Dr. John Frederick Morse passed away at the age of 59. Morse was born December 27, 1815 in Essex Vermont. He practiced medicine in New York. Morse came to California aboard the ship the Humboldt looking for better health and a little gold fever helped as well. After mining for just a short time, he helped open a hospital in the fall of 1849 at the corner of 3rd and K Streets. Morse treated those injured during the flood of January 1850 and was one of the primary physicians during the cholera epidemic of October-November 1850. He helped found the California chapter of the Whig Party in November 1850 and also the Independent Order of the Odd Fellows in Sacramento.

Dr. Morse became the first editor of the Sacramento Daily Union in March 1851. Morse’s biggest contribution to Sacramento’ history was not just his tireless effort to help bring a formal medical practice to early Sacramento or first editor of one of the longest running newspapers in Sacramento, but rather his effort to document the history of Sacramento in its early years. Published with Colville’s 1853-1854 City Directory was the first history of Sacramento by Morse. He wrote a history of the formation of Sutter’s Fort, the gold discovery, the creation of the city during the early days of the Gold Rush, and the disasters that struck the city in its infancy. Dr. Morse moved to San Francisco in 1863 to teach medicine at Toland Medical College (now the University of California, San Francisco). Morse is buried in Mount Olivet Cemetery in San Mateo County.